Lor McQuarrie is one of the main characters. Voiced by Grey DeLisle, she is 12 years old and has medium length, straight, strawberry-blonde hair. Lor loves a variety of sports and, although she despises homework, it is revealed in Home @ Work that she can learn more easily when she is interested in something. Lor is incredibly competitive, extremely spoiled, very vain, and can sometimes be selfish as seen in Sense and Sensitivity. She is of Scottish descent and enjoys watching competitions of traditional Scottish games.

Lor is labeled the 'jock & tomboy' of the group, and is the most athletic out of all the friends. She is able to easily keep ahead of Carver as he's running flat out... while she runs backwards to shout encouragement to him.

Lor has a very large family, with many brothers, so many she forgets how many she has. Lor and her family celebrate Christmas with their extended family (which is also unusually large), as revealed in The Worst Holiday Ever. Lor's paternal grandmother is her hero and role model, and Lor greatly enjoys spending time with her when she comes to visit.

She has around 14 brothers, and more than one is called Danny.

She also have likes for kids shown in episode 19 . 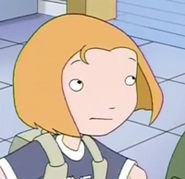 Add a photo to this gallery
Retrieved from "https://theweekenders.fandom.com/wiki/Lor_MacQuarrie?oldid=5682"
Community content is available under CC-BY-SA unless otherwise noted.